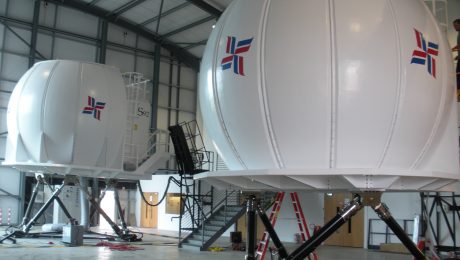 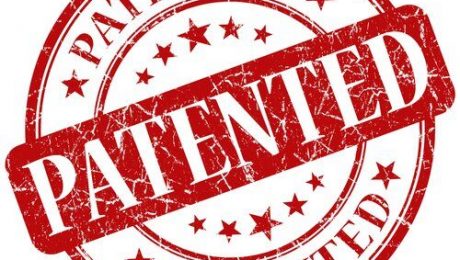 Frasca’s own SimAssist™ software was recently patented. This valuable training software technology tracks a student’s task proficiency in real time, providing feedback to the instructor and automatic assistance to the student at the instructor’s discretion. END_OF_DOCUMENT_TOKEN_TO_BE_REPLACED

American Flyers and Frasca share a long history in civilian simulator training that continues to grow even today.

It all started in 1939, when Reed Pigman founded charter airline and flight training facility American Flyers in Ft. Worth, Texas. American Flyers provided primary flight training to civilian and military pilots, having been chosen as one of the few civilian flight schools to train pilots for the U.S. Army and Navy. The airline was sold in the 1970s while the flight school continued to grow.

Monty set up A.T.E. above a butcher shop across from Chicago’s Midway airport, using surplus Link Trainers from the Army to provide instrument training. The Link Trainers were designed for basic instrument attitude flying and navigation, with no screen or motion and not representing any specific aircraft type. Under today’s regulations, these trainers would be classified as advanced aviation training devices (AATDs).

In 1958, Rudy Frasca, who taught with Monty in the Army simulators, founded Frasca Aviation to design a more advanced simulator than the surplus options on the market. When he presented his first design to A.T.E., Monty was sold. A.T.E. placed an order, becoming Frasca’s first customer and helping launch the company.

Designed prior to the standard six pack’s development, that first Frasca simulator contained only the basic navigation instrumentation, with the advanced inclusion of a dual head VOR. A cover closed over the pilot’s head, creating a dark, quiet environment.

The instructor sat outside the device, communicating with the pilot through an intercom system. A large black device known as a “spider” gave the instructor the aircraft’s location. Uncomplicated, the simulator worked well and was integral in Monty’s further development of instrument instruction techniques.

In 1980, A.T.E. merged with American Flyers, bringing A.T.E’s materials, Frasca simulators, processes, procedures, and intellectual property to American Flyers. Many of the A.T.E. processes and procedures continues as a part of the company to this day.

Frasca’s Reconfigurable Training Device (RTD) was just the solution American Flyers needed. The RTD is a simply designed and easy to use AATD that can operate as a six‐pack and quickly convert to a Garmin G1000 with the turn of a few screws. The device can be reconfigured to convert to different aircraft models, including the Cessna 172, Piper Seminole, and Piper Archer. Additional aircraft kits are in development to expand this offering.

American Flyers continued their historical relationship with Frasca last year, placing an RTD order. They took delivery earlier this year and today use the RTD to continue to blaze trails for the next generation of civilian pilots. 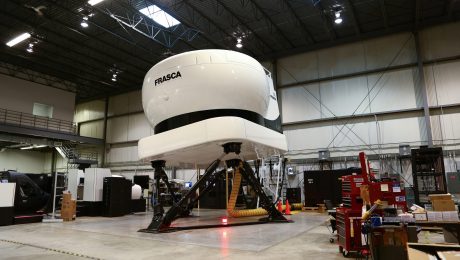 Throughout the past 60 years, Frasca has established itself as a leader in simulator‐based training technology, offering flight training simulation solutions for all aircraft types and market sectors including commercial and defense markets. Frasca’s dedication to developing new and innovative simulation solutions has allowed the company to stay ahead of changing technological advances in instrumentation, navigation, and aircraft design.

During development and manufacturing, we closely managing every aspect of quality control, testing, qualification, and certification. This experience allows us to work with customers to develop their Simulator Quality Management System (SQMS) as required by the FAA, as well as coordinate between our customers and FAA simulator inspectors during the evaluation phase to ensure training devices receive qualification and approval for use within their training programs.

Whether we’re designing the latest cutting edge FFS, or a new AATD, our level of quality and dedication to realistic, high‐fidelity solutions is exactly the same. We believe a high‐quality, reliable simulation solution will ensure a higher transfer of training to the aircraft, helping pilots develop correct skills and reflexes from the first lesson that will translate to increased safety throughout their flying career.

If a customer has a specific need, we put this same level of dedication and focus to work toward developing a custom and reliable solution designed to meet their training goals. You may know us for one or a handful of our products. Yet through our decades of experience, Frasca is one of the only simulator manufacturers with the full product range to service all customers’ needs. Learn more about all our products at www.frasca.com. 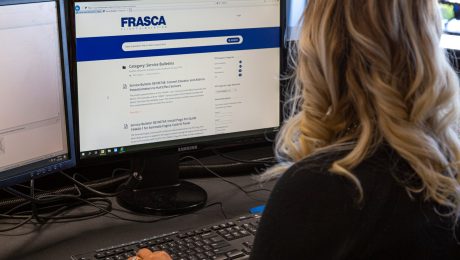 Frasca’s Support Center resources are designed to help our customers operate and maintain their simulators to peak capacity, 24/7/365. From a customer service portal and forum to useful articles, service bulletins, and “how-tos”, Frasca’s support center keeps the answers you need at your fingertips.

To access the support center, direct your browser to https://support.frasca.com. While not required to access very basic support information or subscribe to email updates on new articles, we recommend logging in or creating an account to personalize your experience. Once logged in, you have access to the full site, including the customer forum, document downloads, and all articles. You will also be able to post comments and questions on articles and receive notifications when someone replies.

Upon logging in, you’ll immediately see Article Categories to explore. If you’re in a hurry and want to get to the bottom of an issue, enter your question or search term in the top search box to receive a list of potential articles. Don’t see what you’re looking for? The support center also includes a link on the landing page to submit a question or support request through the Forum. The support center includes a vast number of articles written to help you with the operation and maintenance of our simulators, from technical maintenance and repair issues to intricate and specific operational procedures.

From the top menu after logging in, you can also access Frasca’s continually expanding catalog of downloadable documents, which range from maintenance manuals and assembly instructions to system wire drawings and the RTD AATD letter of approval. As the Customer Service Center grows, new downloads continue to be added, so check back regularly for new documents.

The Support Forum, accessed through the top menu, provides access to Frasca’s professional support team and other members to help you with issues and assist you with troubleshooting. You have the option here to subscribe to see new forum activity, posts, and topics. While members of the support center are visible to each other by default, you can make your profile private in your user profile. Regardless of your visibility, members can only interact through article comments and the forum. They cannot contact you directly through the Support Center. Take a few minutes today to log into the Frasca Support Center to experience the wealth of information, tips, and support available to help you ensure you get the best out of your Frasca simulator. 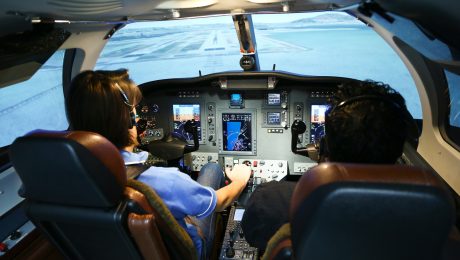 There are two main factors to consider when selecting a flight simulator. The first should always be how accurately the flight simulator emulates the actual aircraft your student flies.

The “Law of Primacy’ dictates that the information and skills a student learns first creates the strongest impressions, making them difficult to change in the future. When learning something for the first time, our brains process on a higher level, which results in more effectively stored information in long‐term memory. It has been proven that in emergency situations, we revert back to how we first learned to execute a task. When pilots are initially trained it’s difficult to change bad habits and ensure the correct habits become second nature., The importance of teaching tasks and skills correctly from day one is paramount. Flight schools can set their students up for success by ensuring accurate training in a simulator where transfer of skills is second nature. When trained in a realistic simulator that is similar to the aircraft they fly, students avoid mistakes that can lead to accidents. Instead, they will instinctively perform the correct actions leading to a successful and safe outcome.

The engineers at Frasca design simulators with the Law of Primacy in mind. Our high‐quality, accurate flight models are meticulously designed to feel, look, and operate like the aircraft they emulate to ensure deep retention of correct training from the very first lesson. Flight controls, fully integrated aircraft systems, and onboard equipment are located in the same places they’d be found in the aircraft, and each responds the same as their aircraft counterparts.

This focus on realistic detail is especially evident in our Reconfigurable Training Device (RTD). In addition to standard instrumentation, the RTD includes the Garmin G1000 and actual Garmin G1000 software that operates and functions identical to the aircraft. We have also included accurate flight modeling based on actual flight test data. Thanks to the realistic experiences in the simulator, students beginning training in the Frasca RTD reduce the aircraft flight training hours they need to properly demonstrate skills.

The second consideration when choosing a simulator is the device’s durability. A simulator is an investment with considerable low overhead compared to an aircraft. Unaffected by weather conditions or the price of fuel, it can effectively operate 24/7 in the busiest flight schools. Given this potential, how will it stand up to constant use, and sometimes abuse, from student pilots and instructors?

Flight schools should consider both acquisition (up‐front) costs in the short‐term and total ownership (life‐cycle) costs in the long‐term. It is important to evaluate flight simulators for overall best value, quality, and long‐term cost, not simply on the upfront price. A seemingly less expensive simulator may cost more over the long term, while a higher purchase price may lead to savings down the road. Additional long‐term costs to evaluate include longer downtime as a result of breakage and waiting on parts, decreased revenue due to unscheduled maintenance time, increased labor costs to repair the flight simulator, decreased useful life if the vendor goes out of business, and lower employee and customer morale of utilizing an inferior and ineffective simulator.