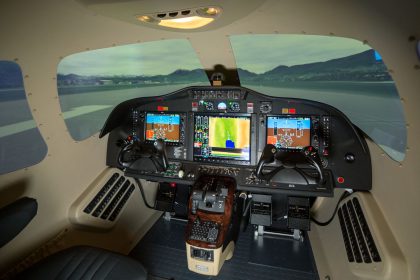 The new simulation center was established by Oyonnair, a leading French business aviation charter company, to train its own Mustang pilots as well pilots flying elsewhere in Europe, Africa and the Middle East that hold an EASA license. Lyon-based Oyonnair was motivated to enter the simulator training market by a recent regulatory changes in France that allow pilots to receive type rating training on complex high performance (single-pilot) aircraft using a new family of flight training devices as an alternative to training on a full-flight simulator (FFS).

“We chose Frasca for this project because of their leadership, experience and expertise in the simulation industry,” says Nathalie Chaillou, DV Training’s Simulator Project Manager and an Oyonnair Mustang line pilot. “We previously had to train our pilots on our own aircraft because there were no Mustang simulators available in Europe.” “We really like the touch screens on Frasca’s Instructor Operating Station (IOS), which are very user friendly and provide excellent tools to facilitate high quality training,” adds Chaillou.

“We are very pleased that DV Training trusted Frasca to provide them with this sophisticated flight simulator,” stated John Frasca, President of Frasca International, Inc. “The regulatory changes in France highlight a technological change underway in the flight training industry that sees advanced flight training devices filling a training role previously only provided by full-flight simulators.”

This is the third Frasca Cessna 510 Citation Mustang simulator. Other Mustang devices are in use at the US Federal Aviation Administration’s Mike Monroney Aeronautical Center in Oklahoma City, OK and at Department of Aviation and Aerospace Science at Metropolitan State University (MSU) in Denver, CO.

Oyonnair is an aviation company based in France specializing in medical and cargo air transportation. The head office is located at Lyon Bron Airport with other aircraft bases in Paris, Rennes and Marseilles. The company’s aircraft and pilots are on call 24/7 to provide rapid flight dispatch with one hour. Oyonnair operates a fleet of Cessna 510 Citation Mustang jets and Piaggio P-180 Avanti turboprops. DV Training is the company’s newly established flight simulation training center at Paris-Charles de Gaulle Airport which houses the Frasca Mustang simulator. 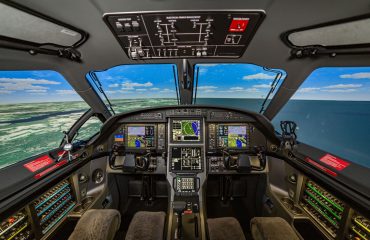 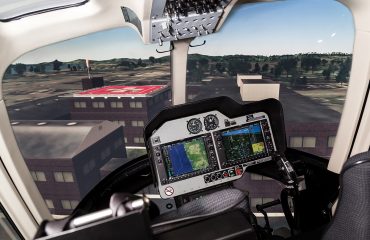