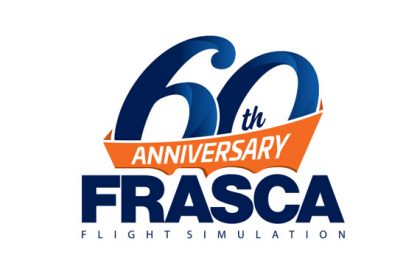 February 19, 2018. Urbana, IL. Flight Simulator Manufacturer Frasca International, Inc. is celebrating their 60th anniversary this year. The company was founded by Rudy Frasca in 1958 and remains a privately held, family run business. Over the past six decades, the company has become well known as a quality supplier of flight simulation equipment for hundreds of flight schools worldwide.

Rudy Frasca founded Frasca Aviation (now, Frasca International) in 1958 after working as a flight simulator instructor & maintenance engineer while serving in the US Navy. The company started out building general aviation “trainers” for for smaller flight schools and colleges with aviation programs and developed a strong customer base with their 141 and 142 product line. Today, Frasca simulators are used by more collegiate aviation programs than any other brand of simulators.

As the company grew and technology advanced, Frasca began providing more complex and customized devices to airline training programs, military organizations and larger flight schools. To keep up with the growing demand for certified devices,  product range grew to include Flight Training Devices and Full Flight simulators. Frasca began developing custom devices for a full range of aircraft, both fixed wing and rotary.

Frasca became known for their ablility to meet technical requirements, customers budgets and delivery timelines, but even more importantly, Frasca earned a reputation as a company who truly understood the industry and cared about their customers success. Rudy Frasca believed in partnerships and developed hundreds of friendships throughout the industry. To this day, visitors stop by the Frasca booth at industry trade shows and ask about Rudy. Even in retirement, he is fondly known as the personable and gregarious founder of this successful simulation company.

In the 60 years since it’s founding, Frasca International has delivered over 2600 flight simulators to approximately 70 countries worldwide. Along the way, the grass roots heritage remained. Rudy Frasca, an avid pilot, bought a small airport and moved his company adjacent to the airfield in 1990. He spent years collecting rare and vintage aircraft. He also raised 8 children with his wife Lucille, making sure that they all had the oportunity to learn to fly and several are still active pilots.

Rudy’s son, John Frasca took over as CEO several years ago and has overseen much of the engineering and technical growth of the company. An engineer by training, John is very hands-on with product development. Other family involved in the business include; David Frasca who serves as Director of Strategic Planning, Bob Frasca as Project Manager, Peggy Frasca Prichard as Advertising Manager and Tom Frasca as Airport Manager. Two other siblings have retired from the business and Rudy’s eldest son Joe, a talented aerobatic pilot who passed away in 1991, is still remembered for his amazing piloting abilities. The company has over 140 full time employees, many who have been with the company over 20 years.

Over the past 60 years, the company has had many milestones with respect to technological breakthoughs, new product announcements and contract awards. In 1983, the company transitioned from analog to digital simulation, utilizing PC technology. In 1984, they developed electric control loading which improved the feel of the controls. In 1985, Frasca introduced their first visual system which has evolved into TruVision™ Global. In 1987, motion bases were applied to general aviation devices. In 1991 Frasca introduced their Graphical Instructors Station (GISt™) which became an industry standard and was only recently replaced by a new IOS named Simplicity™ .

In 1992, the company delivered it’s first Full Flight Simulator followed by several additional FFSs including a Level D CJ1+ to a customer in China in 2014.  In 2003, 16 Level 6 FTDs were delivered to ERAU, the first of their kind. In 2005, a Frasca KingAir FFS with TruVision™ was approved to Level C. In 2007, Frasca delivered the first Level 6 Helicopter FTD and introduced TruVision™ Global, a highly detailed visual system, to the industry.  In 2009 Frasca delivered an FAA Level 7 FTD, in 2010 they delivered a dual qualified Level B FFS and in  2011, a dual qualified Bell 429 L6 FTD, JAA FTD 2.  In 2012 Frasca became ISO 9001:2008 certified.

Mostly recently, in 2017 Frasca delivered first Level 7 Helicopter FTD with their  new Frasca Motion Cueing System (FMCS). Frasca is currently launching a new lower priced Helicopter Training Device (HTD) to meet customer needs in this market. Other new products and technology are under developoment and will be announced later this year.

Frasca plans to celebrate their 60th anniversary with various events and celebrations throughout the year. 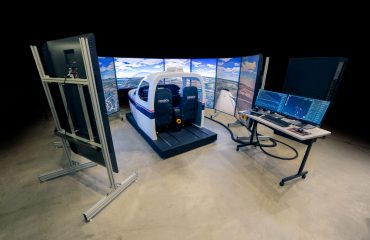